Many tasty colored balls that hold an appetizing and chewy filling. How to resist the Danube Tricolor? You don’t have to, cook it and try its unique taste.

Many tasty colored balls that hold an appetizing and chewy filling. How to resist the Danube Tricolor? You don’t have to, cook it and try its unique taste. 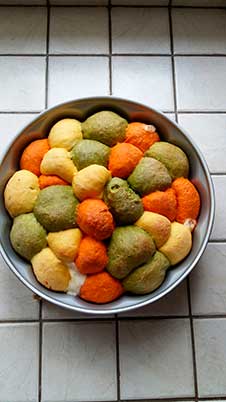 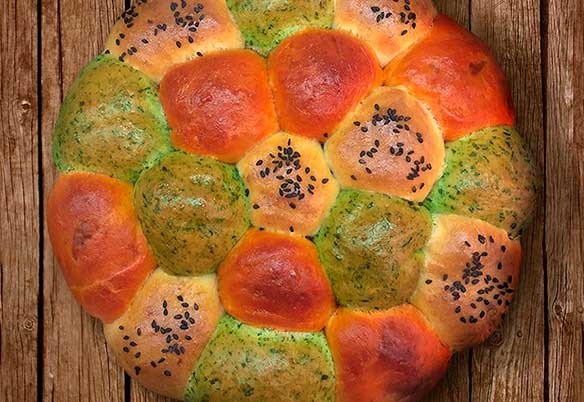 Many tasty colored balls that hold an appetizing and chewy filling. How to resist the Danube Tricolor? The salty variant of the classic sweet Danube is a recipe that brings to the table a cheerful and original dish to prepare for a picnic in the company of your friends and, why not, for a delicious savory snack: your children can also take it to school! These soft colored balls are made of only natural ingredients: olive oil for the green and tomato concentrate for the red, which stand out next to the white balls. A trio reminiscent of the Italian flag and an irresistible filling of provola and ham that you can customize according to your tastes. So what are you waiting for? Fasten your apron, let's start preparing!

Ingredients for the green mixture:

For the red mixture:

For the white mixture:

To brush the tray and the Danube:

To cook the multicolor Danube, start making the green mixture. Pour the basil, milk, and oil into a mixer. Then whisk everything until a smooth cream is obtained.

In another bowl, pour the flour, add the dehydrated yeast, and the sugar. Then put in the basil cream, the yolk, and start working it with your hands until it is consistent.

Then place it on a work surface, add the salt, and knead again for a while to make it absorb well, then place the mixture in a large bowl and under plastic wrap. Let it expand for 2 hours, in the oven turned off, only with the light on, until it has expanded enough.

For the Red Mixture

At this point, take care of making the red dough: put the triple tomato paste in a bowl, dilute it with the milk and add both the yolk and the olive oil. Mix everything until a uniform mixture is obtained.

In another bowl, pour the flour, the dehydrated yeast, the sugar, and the tomato mixture. Start kneading everything with your hands, and only when you have obtained a uniform dough, add the salt and continue working to absorb it.

Put the dough on some kind of a surface, knead it again for a while, then turn it into a ball as previously done for the green mixture. Cover the ball with plastic wrap and give it a period to rise. You can put in the oven, together with the other dough, for something, like 2 hours.

For the White Mixture

Now take care of cooking the last mixture, the white one. Fill the bowl with flour, add the yeast, sugar, the yolk (put aside the egg white which will subsequently be used to brush the Danube), and the milk. Knead it until a uniform mixture is obtained, then mix the salt in. Keep kneading for a while and after giving it a ball shape, transfer it to a bowl under the plastic wrap and set it in the oven that is turned off with the other 2 for a couple of hours, until it is expanded.

Composition of the Danube

Once all 3 doughs have risen, take care of the filling: finely chop both the cooked ham and the provola and set them aside.

Pick up the dough and work each one to give it the shape of a loaf. You can start with the white one. Divide the loaf into 10 pieces. Using a rolling pin flatten and make a disk from each portion and stuff it with some cubes of provola and ham. Then close again, pinching the edges of the dough and make a small ball, modeling it on a work surface, rotating with your fingers to give a spherical shape. Continue until you finish the white dough, then do the same operations for the red mixture and fill each disk before making the balls. Then continue with the green, always making first the loaf, then the pieces, the disks to be stuffed. Once you have completed all the doughs and formed all the balls, grease a mold with the help of a kitchen brush. Place the balls inside, starting from the edge, alternating the colors. Once you have filled the pan, let it rise for another 30 minutes, always in the oven turned off, covered with plastic wrap.

After the indicated time, take the Danube out and heat the oven to 340F. While the oven heats up, brush the Danube with the prepared mixture and cook at 340F for 30 minutes. Once cooked, let the Danube cool off for a while before tasting it.

You can store the tricolor Danube under a glass bell or in a food bag for 1-2 days. You can freeze the cooked Danube or raw before the second rest and defrost it in the refrigerator before cooking.

It is a perfect recipe for many occasions, from the trip out of town to Sunday lunch. You can also create more original shapes, for example, a wave, arranging the balls differently. As for the colors, you can vary using other ingredients according to the season and the yield you want to obtain, such as beetroot for pink and pumpkin for orange.